I love challenges, and this week I’m doing Diane & Carolien’s Alphabet Challenge for the first time. I’m doing the one for next week, they are announcing them early. They challenge us to use tangles with the letters R-V-I.

Looking through several sources, I found the pattern Roundabout. Then I was looking for something to do with the ribbons of this tangle, so that the ends wouldn’t end too unmotivated. Vanity was ideal for that. Then I needed something with I, and I chose Indirella, because I haven’t yet used it in a tile. 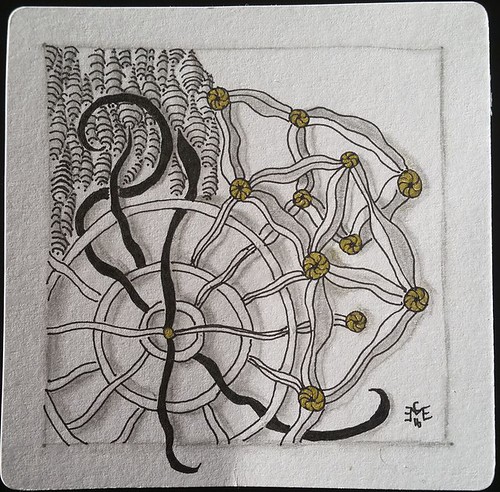 The second work I’d like to share was drawn during watching (or more listening) to the Soccer (british = football) European Championship on Sunday. I had copied a few patterns to my notebook, and decided it was time to give Golven a central place on a page of my new notebook. Unfortunately the paper is not the best for the micron pens, it is sucking up the color, and producing blotches if you are not fast enough. But this was a real fun project, I hadn’t anything planned except that Golven had to be the central tangle. Then I decided on Printemps, an old favourite of mine, but after a while thought that there needed to be a secondary focus. I remembered I had wanted to try squid for quite some time, so I put one above, the other below Golven. The last decision was for Pyramids, which is great to fill some space with something light, and still dimensional. I really took my time, and enjoyed every bit. 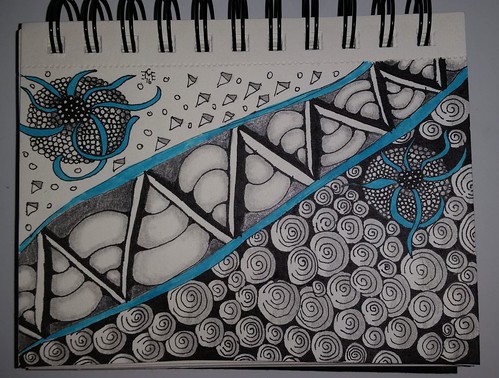